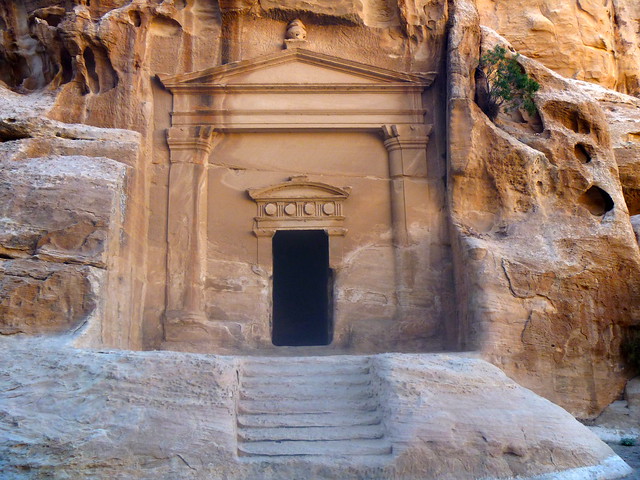 Siq Al-Barid, known as Little Petra, is a smaller Natabean city about a twenty minute drive from Wadi Musa. I’d heard it was pretty cool, and though I worried it might pale in comparison after Petra itself, admission is free so I figured I may as well check it out.

The people at my hotel arranged transport for me and said that the best time to go is a little before sunset. I took it easy for most of the day and then my cab driver, a boisterous middle-aged man, picked me up at around 5 PM. We made the short drive to the site, chatting the whole way, and he dropped me off at the gate and went to go drink tea and wait for me. 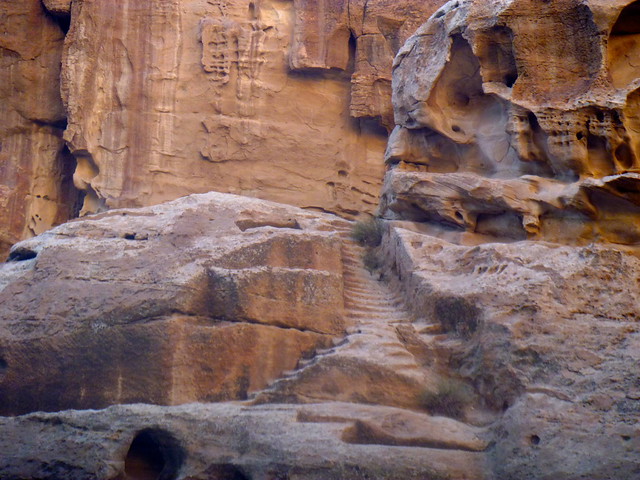 It’s definitely a city of smaller, less impressive ruins, but quite different from the larger Petra. There seems to be an even bigger focus on water technology here, with numerous channels carved into the cliff faces to collect rainwater and direct it into large cisterns carved out of the rock at ground level. The extensive network of these conduits is actually a pretty remarkable feat of engineering. 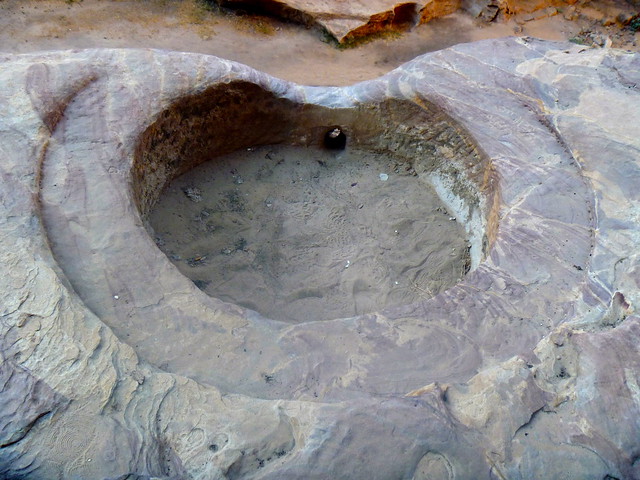 There were very few other tourists at the site, which was quite nice after the hordes at Petra. I met a Dutch couple who had hired a local guide, and they invited me to tag along with them for a bit. Their guide was amazingly spry, as he practically ran up a set of partially eroded stairs, beckoning us to follow, and I found yet another amazing view that let us see all of Little Petra from above. I’m actually really glad I joined them, as I never would have thought to attempt scrambling up the pile of rubble you see below on my own. 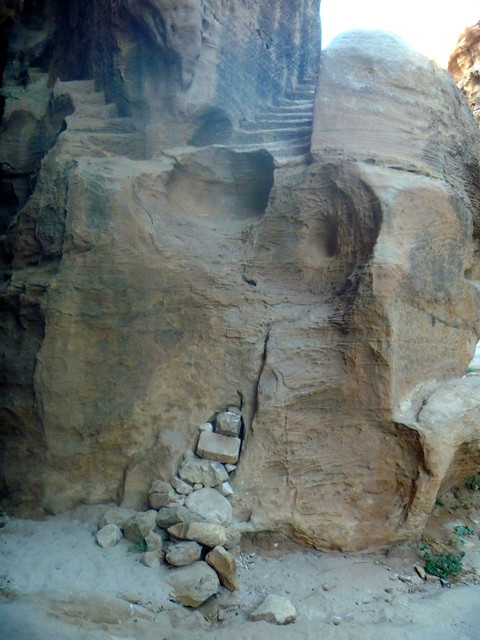 But it yielded this great view: 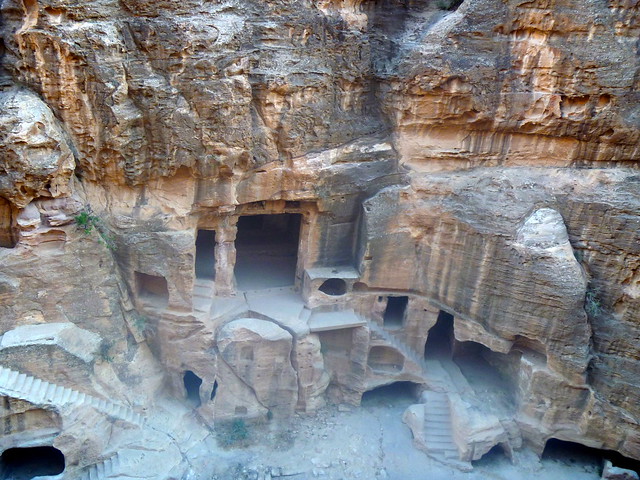 Off in the distance, at the very end of the Siq, I saw another long stairway that seemed to be blocked off by a large boulder. I questioned the guide about it, and he said that it wasn’t completely blocked, there was actually a narrow passage with a cafe on the other side! So I bid farewell to them and went off to see it for myself. 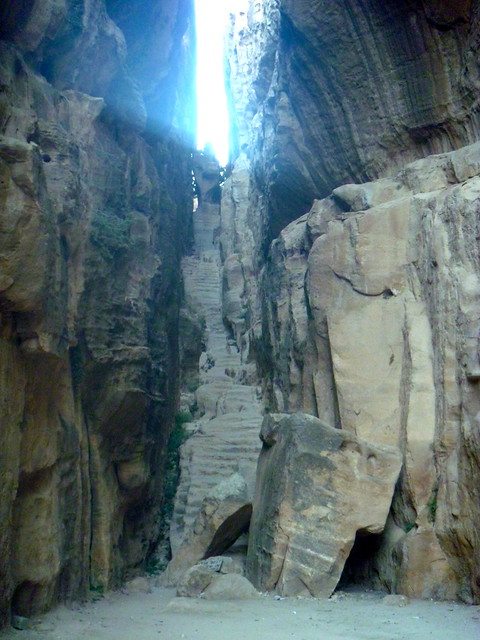 A sign at the bottom once again proclaimed a superlative view. I started up the steps (as usual, eroded to almost a ramp), and squeezed past the huge boulder at the top. After a short flat path, I came to a nice mountaintop plateau where a young Bedouin man was playing the oud next to his tent of wares. He offered me some tea and I sat and chatted with him for a while. This guy was the first one I’d met who was completely non-threatening (maybe it was the lack of pushiness), so when he told me there was a great place to watch the sun set just up the rock, I gladly went along with him. There was indeed a spectacular view but unfortunately there were a lot of clouds so it wasn’t a very colorful sunset. 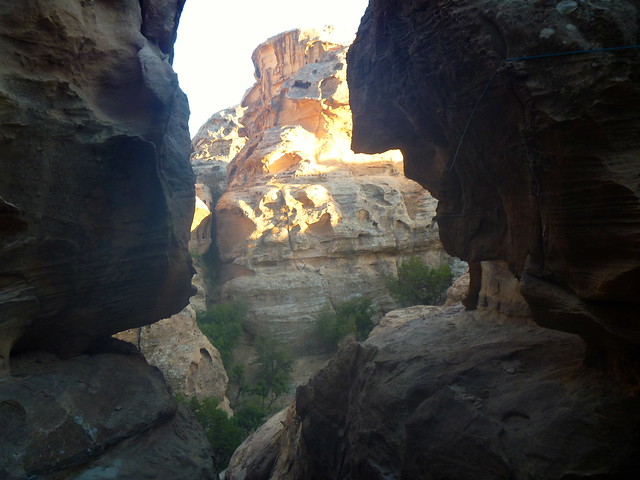 I wanted to head back before it got too dark (especially since my cabbie was waiting), but before I left I bought a traditional red keffiyeh from him. He tied it around my head and inspected it. “Now you just need kohl,” he said. I held as still as possible as he applied it, slightly concerned that he would poke my eye out, but he was very careful. I decided any potential eye infection would be worth it for the story, and then of course bought the kohl too after halfheartedly haggling. It had been the most enjoyable, low-pressure sales pitch I’d had all week.

As I walked back to the gate, I saw my cab driver gesticulating wildly. He looked fairly angry and kept pointing to his watch. When I got close enough to hear him, he started shouting: “Almost two hours late! Why? What happened?” I was totally confused. “But… at my hotel they said I should come and watch the sunset, then go back,” I told him. Apparently, I was supposed to explore Little Petra for an hour and then he was going to drive me to a different place, a lookout point over Wadi Musa, for the sunset. Unfortunately neither he nor the staff at my hotel had ever actually explained that to me.

He gradually warmed up again on our terrifyingly fast drive back to Wadi Musa. Maybe he thought he would be in trouble for returning me late, or had been genuinely worried that something had happened to me. In any case, he drove like the devil was after us, swerving around the few other cars on the road. When we pulled up outside my hotel, one of the owners ran out holding onto my ticket for Petra By Night. Oh no, I had totally forgotten about that!

The cab driver nicely offered to drive me back to Petra. I tipped him well and apologized again for the misunderstanding, though I don’t really see what the problem was. Watch the sunset here or there, what does it matter? I still had a good time. 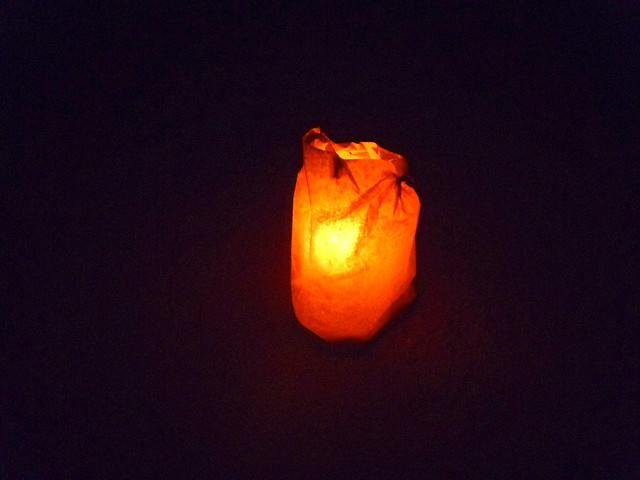 Petra By Night was cool, though slightly underwhelming after seeing the full glory of the Treasury in the daytime. If I could do it again I would definitely have done it the first night before seeing everything else.

We walked through the Siq, pitch black except for the subtle glow from hundreds of votives in paper bags lining the sides of the path. Unfortunately it wasn’t nearly as romantic as it sounds because there were so many obnoxious people. I had to walk really fast to get away from a huge group of young Japanese girls who were singing and playing music on their iPhone… way to break the mood, guys. There were also a ton of people shining bright flashlight beams around, which in my opinion kind of ruins the point.

It was quite dark in places, though. There was a long stretch in the middle that was completely unlit — maybe they started laying out the candles from each end and then ran out midway? Definitely stepped in horse shit there.

When we got to the Treasury, there were long mats laid out to sit on and then they served us tea and a few musicians played a couple songs on traditional Bedouin instruments. It was nice, but quite short — maybe twenty minutes. The Treasury wasn’t lit up quite the way I expected, just a bunch of candles scattered around in front of it, and after the musicians finished they quickly cleared us out.

I wasn’t terribly impressed, but maybe I would have been if that had been my first view of the famous site. Mostly I found myself wondering how much trash was created by the hundreds of paper bags they must go through setting that event up three nights per week. Somewhat overrated, in my view.