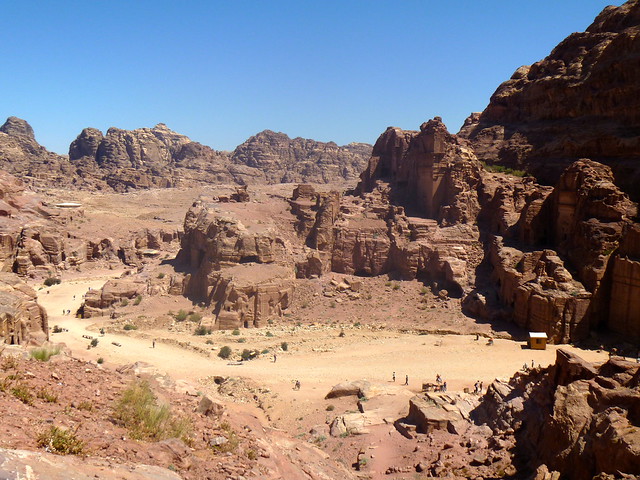 My second day in Petra I started out with two goals: tackle the second major climb, to the High Place of Sacrifice, and avoid any sketchy too-familiar Bedouins trying to lure me into mule rides… or more. I had one lazy day of riding (and was slightly uncomfortable the whole time), so today I promised myself I would be working for that view. 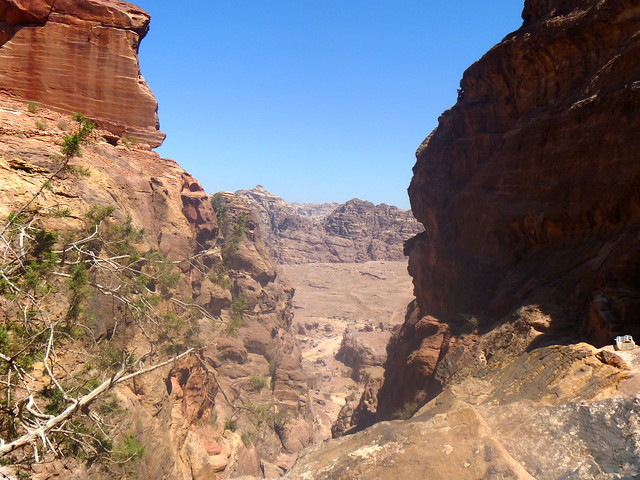 I set off early in the morning and made my way quickly through the Siq and past the Treasury. After rounding the bend, I began the slow, steep climb. It was rough, and I took quite a few breaks, but I actually much preferred being on foot. I found shady spots by the side of the path that had great views of the valley below, so I could sit and admire them as I sipped my water. Besides, I heard from other people I talked to that the climb to the Monastery was worse, so I got off easy. 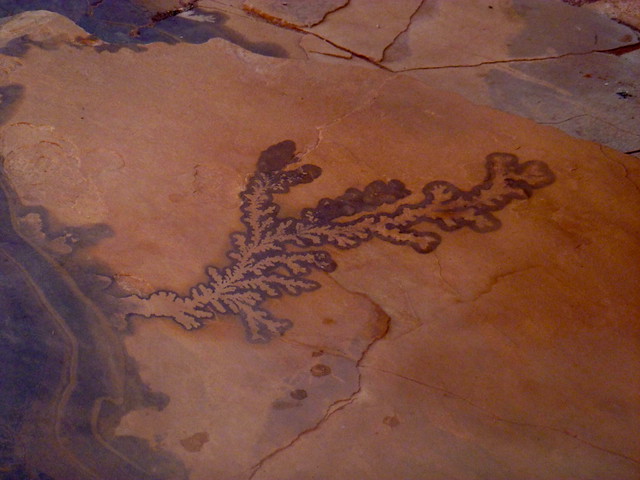 When I stepped off that last stair and onto the plateau, I decided to have a cold drink at the cafe there before continuing on. I had just sat down when I ran into two English girls that I’d met the day before while leaving through the Siq. We all explored together for the rest of the day, which provided some welcomed insulation from the constant hassle that abounds in Petra. Jordan is definitely not the easiest place I’ve traveled alone as a woman, as you may have picked up on. 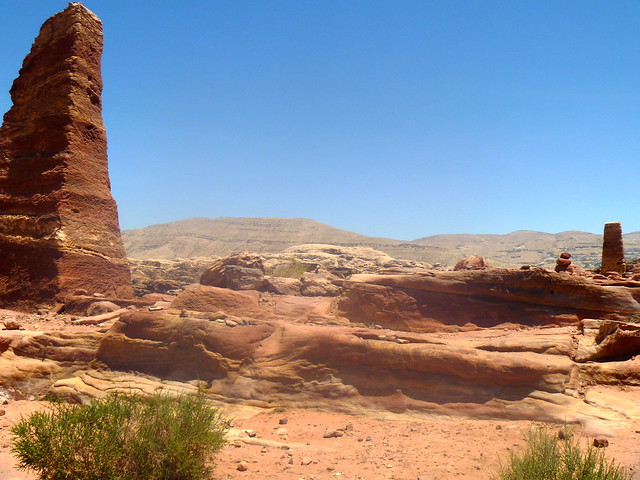 We paused to check out the two stone obelisks on the mountain top before going off in search of the High Place. We totally got lost and went the wrong way, though! The main path is quite degraded, and we went up some stairs but they ended abruptly and seemed to lead nowhere. So we turned and made a loop which turned out to be the long way around (stopping to ask directions at yet another souvenir tent), and didn’t realize until we got to the top that it had actually been the right path. I guess you’re just supposed to start bouldering and climbing over the rubble. We went down that way, anyhow. 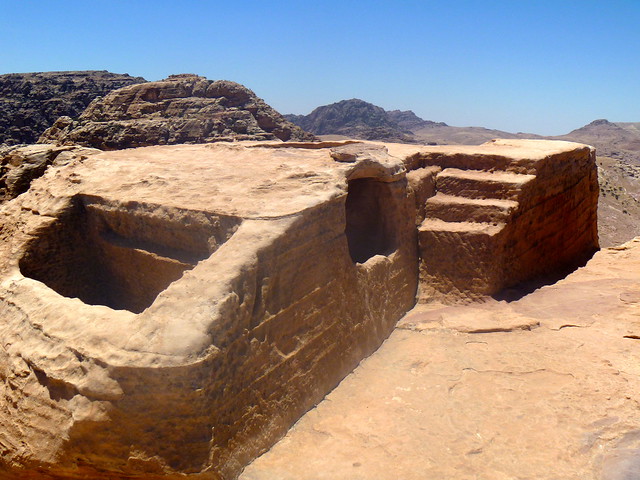 After our long descent, we stopped for lunch at one of the cafes on the main path. Word of warning: there is only one actual restaurant in Petra, located near the bottom of the steps to the Monastery, and I’d imagine it’s very expensive though I didn’t actually investigate. There are lots of other little cafes and stands selling the same overpriced sodas, ice creams, and “boxed lunch”, which basically consists of bread and cheese with maybe some cucumber and tomato. I am an idiot and never actually brought lunch so I kept being forced into buying this crap. The English girls, however, had the foresight to buy a falafel before they entered the gate in the morning and had it wrapped well so it would last until lunch. Be like them, not like me. 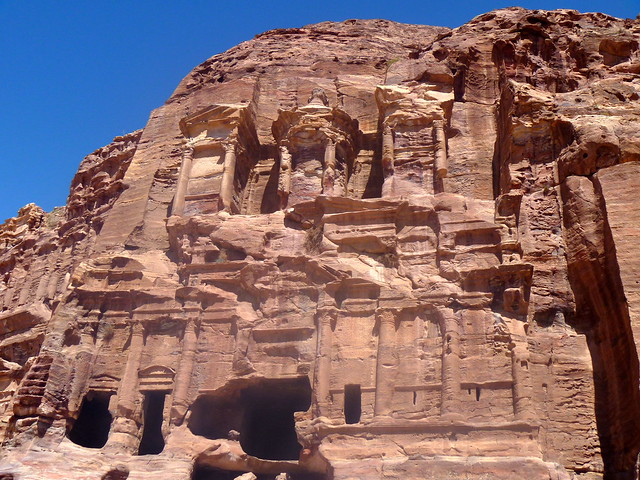 In the afternoon, we decided to explore the Royal Tombs. Though not as ornate or striking as some of the other sights, these are also quite large and pretty cool as you can actually go inside them. The most notable, known a the Urn Tomb, is pretty high up so you can get some great views of the other side of the valley once you’ve climbed up even more flights of stairs. 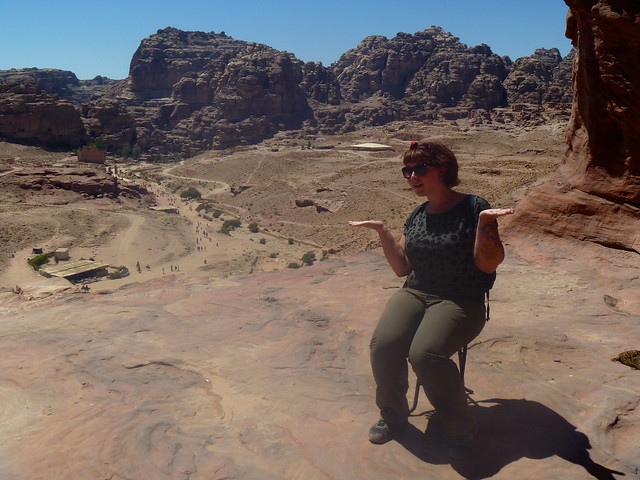 Seriously, the Nabateans cornered the market on stairs. Petra is basically like a huge gym. Who needs the stairmaster? 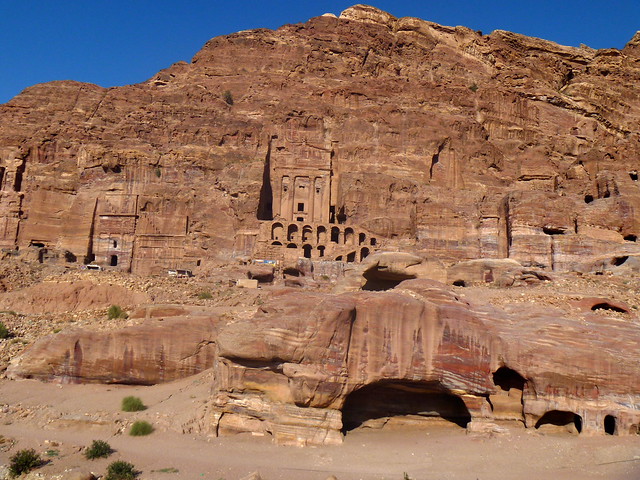